Yesterday evening, I enjoyed a nice game of Dishonored 2. After dealing with the Crown Killer in a non-lethal and somewhat stealthy way, I shut off my PC, went to sleep, and set to continue my endeavour tonight. When I started my PC and fired up Dishonored again, my PC completely froze. I hit the reset button, started Task Manager before starting Dishonored, and I discovered that Steam chose to completely smash my harddrive to pieces. Here's what I saw.

First of all, a big thumbs-up to Microsoft for the refurbishment they gave to Task Manager in Windows 10. When selecting the disk, I immediately get the most important metrics: Utilization in percent (called "Aktive Zeit" or "active time" in percent), latency, read and write throughput. This is awesome.

Just for comparison, this is how we used to measure storage performance back in the day when we didn't know about perfmon:

And even after we found out about perfmon, we still used that technique because it's just a lot simpler than fiddling with perfmon to display a useful set of metrics. So again, big thumbs up for Microsoft here. I like.

The screenshot above shows that my disk is basically begging for mercy. It's completely maxed out, and this is even before Steam started downloading anything. Also, it didn't really have a chance to download anything beforehand, because the box has been turned off for the night. This is somewhat puzzling to me.

So then when Steam did start downloading after all, this even continued: 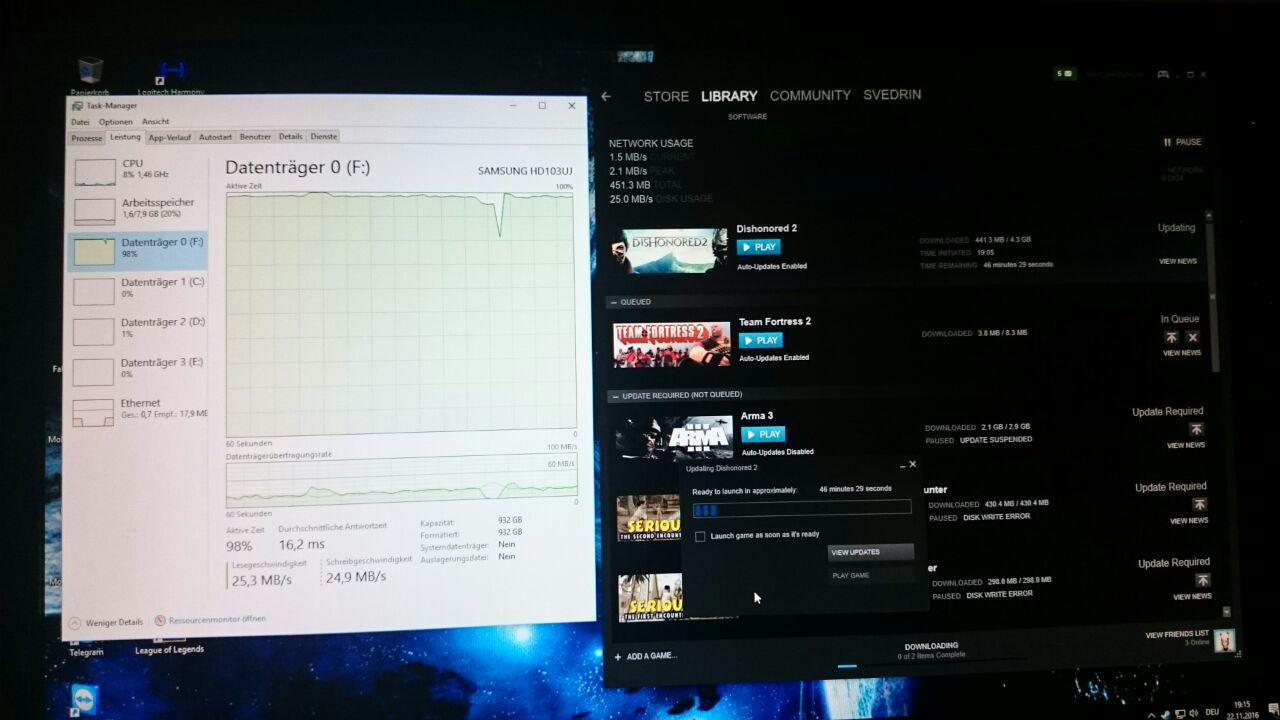 I'm just wondering what's going on here... Steam says it's downloading at around 1.5MB/s, which sounds reasonable considering the bandwidth of my internet connection. Looks like it's extracting stuff in the background or something – but still, maps and materials are normally huge files ("huge" as in, an MB or more), so I'm wondering why my disk is maxed out at 25 MB/s. Seems to me that this IO pattern shouldn't have such a huge impact. But, oh well, it does.

And since I'm bored while it's updating, I thought I'd share.

Oddly enough, Steam stopped maxing out the disk before it was finished updating Dishonored. From that time until the update was done, disk write throughput pretty much matched the download speed.

I really wonder what it was doing :/