I’m currently building some home automation stuff using NodeRED. One of the things I need to do is trigger home automation actions from Prometheus: I’m monitoring our Solar panels using it, and I want the shutters to go down whenever it’s sunny outside. I have a Prometheus alert rule that tells me when that is. But how can I trigger NodeRED from there?

As an extra challenge, I wanted to see if I can actually do this without writing a single line of code. I do need a couple more nodes this way, but it works and it’s not all that complicated. Here’s how it’s done.

First of all, we need to tell the Alert Manager that it shall send alerts also to our NodeRED instance. This is achieved in alert-manager.conf:

This instructs Alert-Manager to pipe all alerts through NodeRED as a webhook, before sending it to the other receivers that may or may not be listed in the config (that’s what the continue: true part does).

Note that the /prometheus part of the URL can be chosen freely, it just needs to match the URL that you set your HTTP input node to.

So the first thing we should probably be doing is set up NodeRED in a way that it can react to Prometheus correctly and receive alerts, sending back an HTTP 200 response to every request that comes from Alert-Manager. Since we don’t want to be sending the payload back in every response, we set it to an empty string before responding. And since we’d like to see the alerts we receive in the Debug console to make sure we’re actually doing something, let’s also add a Debug node in. The whole flow now looks like this:

As you can see, the pipeline consists of an HTTP input node configured to listen on the /prometheus URL. This one pipes its data into a “change” node to set the payload to an empty string, like so:

And finally, an HTTP Response node that sends an empty HTTP 200 Ok response back to Prometheus. Further, there’s a debug node included that logs all the messages we receive on that input. Deploy, and your pipe is already working!

To test it, you can send data to it like this:

As a result, you should see a message like this one appearing in the Debug tab of the sidebar in NodeRED: 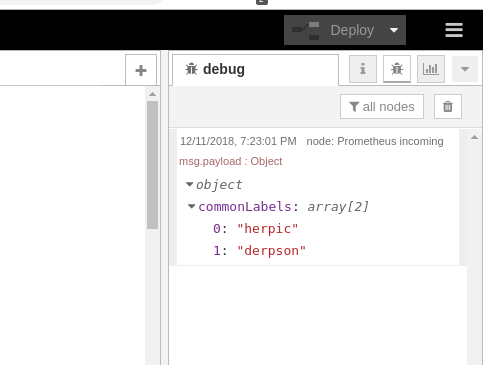 It’s good that we’re able to receive messages from Prometheus, but now we also need to make sense of them. Since this doesn’t have to do anything with the response that we send to Prometheus, we’ll do this as a separate branch of our flow that we also attach to the Input node.

Let’s examine how it works.

The prometheus documentation has some information on how exactly the payload looks that Alert-Manager will send us. In short, there’s an object that tells us whether the alerts it’s talking about are currently active (“firing”) or have just been cleared (“resolved”), and what those alerts are. I’m specifically looking for an alert that has a label called trigger with value roll, because I want that one to trigger my rollershutter. When the alert is firing we should close the rollershutter, and when the alert is resolved, open it back up. This involves a number of nodes:

And that’s how you can use NodeRED to process alerts from Prometheus!